“Why?” That’s probably my favorite question. Whereas some kids go through a brief phase of “But, why?” I never really outgrew that, which is probably one of the driving forces behind my choice to become a scientist.

My editor at Pro Se Productions, who is also a writer, discussed the “why” behind his choice to write pulp and also addressed the fact that most writers will give a rather vague answer when asked why we write and even why we write what we write.

The reason, as with many things, goes way back to childhood. Even before I read, I played make believe. Mr. Rogers showed me that in Make Believe, anything could happen. My family had some rocky times. To be honest it was probably rocky and troubled more often than not. In Make Believe, I didn’t have to be me, people were nice, the bad guys got what was coming to them– or more likely, realized how horrid they had been and became good, and all was right with the world.

I recall sitting down, even as young as five, to watch the evening news. I remember Ronald Regan’s re-election, Challenger’s explosion, watching the fall of the Berlin wall, Tienanmen square massacre, Iran Contra, and innumerable other incidents that are now little blurbs in the history books. While I rarely comprehended all the nuances of the events I witnessed on television, I felt the emotional impact.

I realized that horrible things happened in the world, but I was “the glass is half full, and if it isn’t I’ll make it that way” sort of gal. Along with my daily dose of reality, I watched re-runs of the original Star Trek, and then a few years later ST:TNG won my unending devotion. Those shows, with a smattering of other science fiction shows and movies, reinforced my beliefs that humanity could be so much more, so much better, but sometimes it took a single voice to lead the way. Science fiction wasn’t afraid to question the status quo. It wasn’t afraid to ask “What if?” It made you think. It made you ponder. It wasn’t about the special effects and explosions of today’s sci-fi movies and shows. It invested you in characters and you found yourself wrestling with dilemmas right beside them in your imagination.

On a small scale, when one reads, one is taken to another place, escapes to a universe where horrors or drudgery from everyday life disappear as long as you keep turning pages. Fiction can open your eyes to ideas in ways that mere didactic knowledge cannot. Open one mind to love, acceptance, tolerance and all of the things our world is in so much need of and you have planted a seed of hope for the human race.  Make it entertaining, fantastical, and gut wrenching and you make that world and those characters stick with a reader long after they put the book down.

How does all of that boil down to why I write?

In short, I write to change the world.

Yes, I know, you expected the one with the TARDIS. I’m sorry, I’ve misplaced mine. It would really come in handy when dropping children off at different schools which insist on starting at the same time on opposite ends of town. Needless to say, Miss Drama has a few tardies as a result.

I graduated in December and am now employed. Yay for work, b/c work = paycheck. Now that I’m working, the urge to write has returned, at least in my non-comatose hours. I also want to garden, but it’s below 32 F outside. The motivation macro in my brain is clearly out of sync with the world. Perhaps it’s from zooming around in the TARDIS? 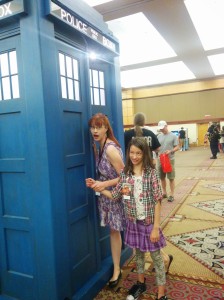 I suppose if I want to get writing done I’ll simply have to recalibrate the inertial dampers. What? That always worked in Star Trek, unless of course they had to reverse polarity.

So, against all sane reason, I signed up to do NaNoWriMo. In all honesty, I highly doubt I’ll reach the 50,000 word count goal, but that’s okay. I signed up to join many of my writer friends, share in the angst that accompanies the grueling process of writing a first draft, and to end my streak of procrastination.

First of all, let me point out what National Novel Writing Month ISN’T meant to accomplish:

The point of all the hub-bub of NaNoWriMo is to help aspiring writers get past that daunting first step: writing the novel. Whether digital or an actual blank page, that expanse of white can be a monumental hurdle to leap. When thousands of other people are attempting the same task and you realize it isn’t particularly easy for any of them, you discover you aren’t alone. The important thing is to persevere.

There are ten gazillion reasons to put off writing that story rattling in your head, but you only need one good reason to set pen to paper or fingers to keys: determination to tell your story.